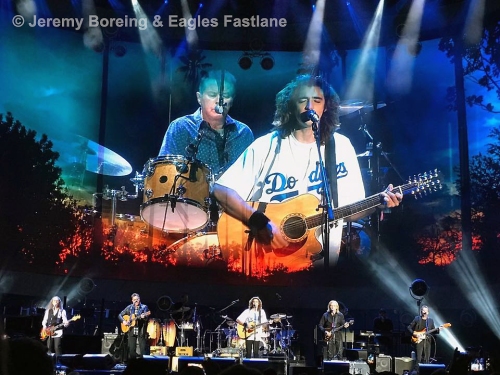 15 July 2017. Dodger Stadium, The Classic West, tonight, starring the Eagles, and I was not there.

My summer concert season has been in full swing and I have a backlog of at least seven reviews and reports to write with a lot of great photos from great shows. And yet here I am on a warm Saturday LA night writing about a show I didn’t even go to. An absence that has caused me much more anguish than I expected. An absence I will regret always.

Regrets. I have a few. In April of last year Don Henley did a very intimate performance and Q&A in Dallas for Runaway Tours. It was an expensive event so I decided I shouldn’t spend the money. When I found out from the reports just how amazing an event it was, I realised what a big mistake I had made not going and I could not shake my remorse. I promised myself if he ever did it again, no matter what the cost I would go.

Meanwhile, I saw a bunch of Henley concerts, reviewed on this blog, and resolved to see him whenever and wherever possible from now on because, as I said in this post, seeing a Henley show was “the closest you will ever get to seeing the Eagles again.” Given that Glenn Frey had died, and that Henley said repeatedly – and emphatically – that the Eagles were over, and it would be wrong to perform again without Glenn. As recently as December, being interviewed by Gayle King on CBS around the time of the Kennedy Center Honors, Don stated that he could not see it as feasible to go on as a band without Glenn.

I believed him and so did my friends for whom this Eagles stuff matters, and so after seeing a series of great Henley shows in Texas in January, we were comfortable with and accepting of the sad reality of no more Eagles. And we were as emphatic as Don Henley that the Eagles would not perform again. Whenever someone would suggest the band would resume, we, the true believers, would state in no uncertain terms, “No, that won’t happen. Don said it’s over. Irving said it’s over.”

Eagles manager Irving Azoff in fact said at the time of Glenn’s death, “We didn’t intend for it to end this way, but you couldn’t write the script for how to have it end any bigger.” It was grandly tragic but it was a fitting remark, and I believed it.

So Irving and Don made liars of us. Because all of a sudden early this year came the news, leaked first to Billboard magazine, that this huge two-day festival was being planned headlined by Eagles and Fleetwood Mac. The Classic West in Los Angeles and The Classic East in New York. And we went, “WTF??? It can’t be possible!” And then our hearts sank as we saw it was really going to happen. And sank even further when we saw the ticket prices. You want to be up front? That will be in the vicinity of $3000 per ticket. The other bands – Steely Dan, Doobie Brothers, Earth Wind & Fire and Journey – I had either seen plenty of times or had no desire to see anyway. And what could the Eagles even be without Glenn Frey, the founder, the boss of the band? It was upsetting and confusing and way too expensive.

I was angry about it. I called it Shit Fest. If it was for the fans, to give them the music they wanted to hear yet again – the justification being that the love and longing for Eagles songs was compelling the band to get together and do it again – why make it so crazily unaffordable to those of us that won’t go if we can’t be up close? There was a backlash on social media with the diehard fans outspoken about how they could not accept any version of the Eagles without Glenn. Tickets were selling, but there must have been some concern from the powers that be because a PR spin campaign began as it was announced that Glenn’s son Deacon Frey and country star Vince Gill would perform with the band. Don started giving interviews explaining the thinking behind it and while my friends and I were infuriated by what we saw as hypocrisy and greed, we also knew deep down that what he was saying made sense. “I’m not going to spend a lot of time defending this, because I don’t see anything wrong with it. I think we’re carrying on a family tradition in a very family type way,” Don said in the LA Times. I could see how having Deacon Frey step in on behalf of his father was a lovely and brave thing and that Vince Gill was an affable, talented, unthreatening addition. More affordable one-day tickets went on sale. I looked at those and thought, no, it’s still money I don’t have to spend right now, and it’s still a shit fest. It’s at Dodger Stadium in mid-July. It will be brutally hot and crowded and I want to be up front and those tickets are gone. And I don’t need to be there.

But Irving Azoff, arguably the greatest music mogul of our time, is much smarter than me. He might have “a nasty reputation as a cruel dude” to borrow from “Life In The Fast Lane”, but I would walk on hot coals to work with him, or even just to get a meeting with him, because he is a genius, and he just knows what will work and this was obviously going to work.

So I contacted my famous photographer friend, whose images of the Eagles defined them visually for all time, to see if he was planning to go and could perhaps get an extra pass for me. Initially dubious about the event, he had started to get interested in it so was trying to make contact. “It’s a shit fest,” I said to him. “It’s going to be a clusterf#@k,” he agreed, deciding to stay away.

I kept eyeing ticket opportunities, people offloading tickets they couldn’t use, but none of them close enough for my liking. I checked again this morning and there were some okay seats, 18 rows back and to the side, but no, I shouldn’t spend the money, and it’s going to be a shit fest, right?

Well it turns out the only shit fest was the one inside my head. The actual show was remarkable. Not the best Eagles show ever, because it could never be that without Glenn, but an emotionally charged historical moment in time that I watched on fuzzy shaky bad videos on Periscope, Instagram, Twitter and Facebook Live – and thank heavens there is at least that technology nowadays, and that the usual Eagles/Henley photo/video restrictions were relaxed for the night. I sat at my computer in Los Angeles, and my friends in Austin sat at theirs, and we chatted throughout the concert, which we were able to view most of, and we all admitted to each other that we wanted to be there. And for me, knowing it was just an hour or so down the freeway from where I was, it was really tough to bear. I moved to LA to be in close proximity to these amazing emotional music experiences. And not finding a way to be at this one, no matter where I sat, no matter what it cost, was a misstep I will always regret.

Runaway Tours did announce another Don Henley experience. Again in Dallas, and set for next weekend, this time the intimate Q&A event follows a huge concert the night before at the American Airlines Center that Don decided he would do to celebrate his 70th birthday. We refer to it as Birthday Bash and my friends and I will be there. Among the special guests will be Timothy B Schmit and Joe Walsh. If Deacon Frey is going to be there also, I might be able to relax about the huge mistake I made not going to The Classic West. But no mention has been made of that and it still won’t be what tonight was – the first public performance by the Eagles without Glenn Frey, featuring the son of Glenn Frey, doing his father proud. There were more than 50,000 people at Dodger Stadium tonight to witness that and I wasn’t one of them. Big mistake.

Thank you Eagles Fastlane and Getty Images for the great pictures.